Let me suggest a little pseudo-scientific experiment which goal is to literally picture how useful the above mentioned study can be.

In this so-called experiment, we will inquire about the daily activities of a human being. Let’s consider an ordinary human being, from any ethnic origin or religion, etc. Then any resemblance to one of your relatives or friends would be purely coincidental. Let’s name this human being Mr A. Conveniently a very common letter.

Like every day, courtesy to his loving-licking cat, Mr A wakes up. Let’s call this cat Felix. At that precise moment, Mr A fights and overpowers a force mathematically given by

which is called the universal law of gravitation.

Once washed, swept clean, waxed and dressed, Mr A gets down the spiral stairs. Those are especially studied to be free of curve discontinuity to avoid bumps, pulls, bad landings and other bad falls graciously offered by cheap and ill-conceived stairs.

Curvature of a curve with cartesian parametric equations :

Successfully and securely down in his kitchen, Mr A fixes himself a cup of coffee that he heats up using electromagnetic radiation, while attempting to negotiate with Felix about a strangely exponentially increasing consumption of cat food.

Here is a portrait of an electromagnetic wave, head of the association for applied trigonometry in the micro-wave :

Dreaming about money, love and power while stirring his coffee, Mr A sees through the cafeinated vapor the formation of a strange shape in his drink, a cardioid : 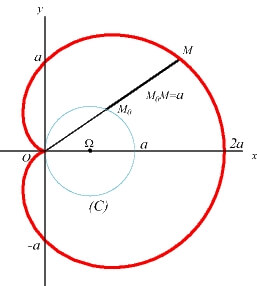 At that precise moment, Mr A isn’t late for work, so he kills some time by typing some rubbish on his computer destined to be transmitted by mail, in binary code. These bits of 1 and 0 are structured in matrices to auto-detect and repair any lost or damaged information.

Lucky for us, Mr A doesn’t want to use any software or computer game that would require a fastidious and complicated mathematical overview, and anyway he’s already late, what a shock.

Back from his work safe and sound thanks to screw theory, momentums and other marvels of mechanical engineering , Mr A relaxes at a friend’s poker game. As usual, he unloads them of some money thanks to its profound knowledge of the game, of probability and game theory.

Then after such a long day and heavy schedule, Mr A will go to sleep, eager to start another day, a sunny day according to forecasts… By the way, have I mentioned that Mr A is a expert in chaos theory ? He is… a weather man !

The author declines any responsibility concerning the short-cuts and debatable clichés herein used with humoristic intent. For any reclamation/participation, the plaintiff/accomplice is welcome to comment. The author also doesn’t have the luck to be of English native language, hence the approximative grammar and probable numerous inadequate expressions.