08 Jun 2011The myth of Niels Bohr and the barometer question 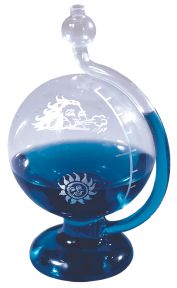 In 1959 was published in the journal Pride of the American College Public Relations Association an essay entitled Angels on a Pin, by Alexander Calandra, professor of physics at Washington University in St. Louis, Missouri. The story is about a physics student who surprises his professor on a simple question of physics.

« On almost every level, this essay falls apart on critical analysis. I wonder why it has become such a legend in the physics community ? »

The title is supposed to be a reference to medieval scholastics adept of meaningless questions such as How many angels can dance on the point of a pin ?

Personally, I see in this fable an illustration of the importance of creativity in sciences, a skill that is too rarely stimulated in the teaching of sciences, when it isn’t consistently ignored…

The student is generally said to be Niels Henrik David Bohr (1885 – 1962), Nobel prize of Physics in 1922 and the referee is supposed to be the chemist Sir Ernest Rutherford (1871-1937), Nobel prize of Chemistry in 1908, even if they didn’t meet until Bohr finished his scholarship.

Angels on a Pin

« Some time ago I received a call from a colleague who asked if I would be the referee on the grading of an examination question. He was about to give a student a zero for his answer to a physics question, while the student claimed he should receive a perfect score and would if the system were not set up against the student : The instructor and the student agreed to submit this to an impartial arbiter, and I was selected.

I went to my colleague’s office and read the examination question : “Show how it is possible to determine the height of a tall building with the aid of a barometer.”

I gave the student six minutes to answer the question with the warning that the answer should show some knowledge of physics. At the end of five minutes, he had not written anything. I asked if he wished to give up, but he said no. He had many answers to this problem ; he was just thinking of the best one. I excused myself for interrupting him and asked him to please go on. In the next minute he dashed off his answer which read :

“Take the barometer to the top of the building and lean over the edge of the roof. Drop that barometer, timing its fall with a stopwatch. Then using the formula $x=\dfrac{gt^2}2$, calculate the height of the building.

At this point I asked my colleague if he would give up. He conceded, and I gave the student almost full credit.

In leaving my colleague’s office, I recalled that the student had said he had many other answers to the problem, so I asked him what they were. “Oh yes,” said the student. “There are a great many ways of getting the height of a tall building with a barometer. For example, you could take the barometer out on a sunny day and measure the height of the barometer and the length of its shadow, and the length of the shadow of the building and by the use of a simple proportion, determine the height of the building.”

“Yes,” said the student. “There is a very basic measurement method that you will like. In this method you take the barometer and begin to walk up the stairs. As you climb the stairs, you mark off the length of the barometer along the wall. You then count the number of marks, and this will give you the height of the building in barometer units. A very direct method.”

“Of course, if you want a more sophisticated method, you can tie the barometer to the end of a string, swing it as a pendulum, and determine the value of ‘g’ at the street level and at the top of the building. From the difference of the two values of ‘g’ the height of the building can be calculated.”

Finally, he concluded, there are many other ways of solving the problem. “Probably the best,” he said, “is to take the barometer to the basement and knock on the superintendent’s door. When the superintendent answers, you speak to him as follows : “Mr. Superintendent, here I have a fine barometer. If you tell me the height of this building, I will give you this barometer.”

At this point I asked the student if he really did know the conventional answer to this question. He admitted that he did, said that he was fed up with high school and college instructors trying to teach him how to think, using the “scientific method,” and to explore the deep inner logic of the subject in a pedantic way, as is often done in the new mathematics, rather than teaching him the structure of the subject. With this in mind, he decided to revive scholasticism as an academic lark to challenge the Sputnik-panicked classrooms of America. »