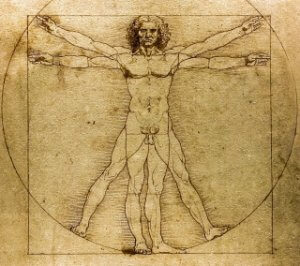 What is a fraction ?

It seems easy to answer this question with the concept of proportion, but we will see that rational numbers possess some quite extraordinary properties.

Once we have answered these questions, we will see a few examples of irrational numbers, such as \pi and \sqrt 2.

Then we’ll tackle a few structural and topological properties of the set of rational numbers.

Take an aspirin, it is going to be a bit more complicated than the previous posts of the series.

The measure of proportion

We saw in the preceding post about integers that they consisted in a way to compare a set of objects with another set of (possibly) completely different objects, only focusing on their difference in cardinality. Rational numbers give us the same opportunity, but focusing on proportion.

Remember that we can define the difference between two couple of numbers with the addition :

The same thing can help us define the proportion, using multiplication :

So when two couple of numbers are in proportion, we can note (x,y) \sim (x^\prime,y^\prime) , and we say that their proportion or rapport is the same. We also note it \frac xy = \frac{x^\prime}{y^\prime}.

4 balls and 6 apples represented by the couple (4,6) or equivalently by the fraction \frac46.

2 balls and 3 apples represented by the couple (2,3) or equivalently by the fraction \frac23.

– Wait a minute ! What is this BS ? We are dividing balls by apples !

– Yes we are, but it doesn’t matter. When we use an everyday-life metaphor to express a mathematical rule, like : “we cannot subtract apples from oranges !” we are so much WRONG. Sure we cannot subtract apples from oranges, but we certainly can subtract a number of apples by a number of oranges : those two are natural numbers, why the hell would we not be able to apply a perfectly fine operation on them ? Of course the result is neither a number of balls nor a number of apples, it’s just a number, a proportion between two quantities. Nothing more.

Well, ok we need to assume we always have at least one apple in our case, so as never to divide by zero, but that’s all. The thing is, when we try to link abstract mathematical concepts and real objects, we are, more often than not, crippling these concepts.

We are doing abstract calculus : its meaning is given to us by the fact that it is true according to the rules of calculus, and it is not for our intuitive representations to decide.

So yes, we are dividing a number of balls by a number of apples, and there’s nothing wrong with that if interpreted properly.

Since 4\times 3= 6\times 2 we have here the same proportion of balls relatively to the apples, we note \frac46=\frac23.

Note that the proportion of balls relatively to the total number of balls and apples alike is different, since it can be represented by the fraction \frac4{10} in the first case and \frac 25 in the last. These still are the same proportions because 4\times 5= 10\times 2.

Then a fraction is the proportion of a set of objects relatively to another set of objects. All right, but then what about a negative fraction as -\frac23 ?

So then the same fraction but negative is :

2 more apples than balls and 3 more balls than apples represented by the couple of integers (-2,3) or the fraction -\frac23.

2 more balls than apples and 3 more apples than balls represented by the couple of integers (2,-3) or the fraction -\frac23.

See ? Fractions are way more complicated than they look !

But wait… there’s another way, and you probably thought of it already : we can use only three natural numbers to define a fraction, one of them being strictly positive (it would be the denominator) since only one of the two numbers in a fraction need to be relative (say, the numerator).

See in the first note the rigorous definitions of these three alternate ways.

An irrational number is a number that cannot be written as a fraction of integers. It means there are proportions that cannot be represented by a finite number of apples and balls, or any other objects.

Let’s take for example the number \sqrt2. It is indeed a proportion : the rapport of the length of a square’s side relatively to the length of its diagonal. That’s what surprised the Greek mathematicians of the antiquity : a geometrical proportion that cannot be the proportion between two numbers.

In modern terms, natural numbers cannot characterize the measure of lengths, and neither can integers or even rationals. It is said that \sqrt2 is an irrational number : \sqrt2\notin\mathbb Q.

Another irrational, certainly the most famous, is \pi. It measures the proportion between the circumference of a circle and its diameter, but cannot be written as the proportion of two integers : \pi\notin\mathbb Q.

The regularity of rational numbers

In the decimal numeral system (in fact in any numeral system of base superior to one), we can easily see this fundamental difference between rational and irrationals. The representation of a rational number isn’t necessarily finite (as it is for natural numbers, integers or decimals), but it is systematically periodical :

Surprising topological properties of \mathbb Q the field of rationals

First, let’s remark that between two fractions, there always exists another one.

Indeed, if we take two rational numbers a and b, then \frac{a+b}2 is a different rational comprised between the first two.

Now between two fractions, we can also always find a real irrational number. For example \frac{a(b-a)}3\sqrt2 is indeed between a and b.

We can demonstrate that between two irrationals, there always exists another irrational, and a rational one. So,

The set of irrational numbers \mathbb I is dense in \mathbb R.

Now let’s see which of the two contains the most elements.

The set of rational numbers is countable, as we can count2 them all : 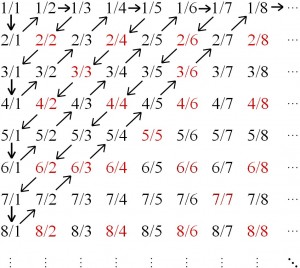 Positive rational numbers and a way to count them Source : Wikipedia Commons, Cronholm144

But, the set of real numbers is not countable (as proves Cantor’s diagonal argument). We cannot put in bijection (one-to-one correspondence) real numbers and natural numbers.

\mathbb Q is countable but \mathbb R is not.

From which we can deduce

The set of irrational numbers \mathbb I is not countable, meaning nearly all real numbers are irrational.

How is that possible ?

Well, it comes from the fact that the set of rational numbers is at the same time infinite and negligible. It seems paradoxical, but it is bulletproof !

A negligible set in \mathbb R is contained in a sequence of intervals of which the total length is arbitrarily small. The length of an interval [a,b] in \mathbb R is nothing more than the difference b-a.

An example of negligible set is a singleton, like for example the set containing only \pi, written \{\pi\} because it is included in the interval

of length 1, and also included in the interval

of length \frac12, and so forth. In fact, \pi is in every interval

of length \frac2n. We see that the more n grows, the smaller the interval gets, but \pi will always be in those. That’s why \{\pi\} is negligible in the set of real numbers.

It seems reasonable to think that the union of several negligible sets is still a negligible one. So the set of natural numbers comprised between 0 and \pi, that is to say \{0,1,2,3\} is a negligible set in \mathbb R. After all, it seems intuitive that the set of a few numbers be negligible compared to the infinity of real numbers.

It is the intrusion of the concept of infinity that gives this surprising property to the set of rational numbers, to be at the same time dense and negligible in \mathbb R. It is not a paradox, and mathematicians are used to this strange but perfectly coherent property.

In the next post, we will see what is hiding behind the different levels of infinity in the transfinite numbers.

Other posts on the topic «About numbers»

1. For the purists, the set of rational numbers can be built in at least three different manners :

2. To count means to put in a one-to-one correspondence with the set of natural numbers. Here is a procedure for doing so :

This way we can count all the rational numbers.

3. It is implied that we only take as much as there are natural numbers. That is to say, only the union of a countable infinity of negligible sets is negligible. We will see in a future post that there indeed exists multiple cardinal infinites.