There is no satisfactory definition of the general concept of number. However, lots of particular numbers can be rigorously defined. Natural numbers, integers, imaginary, transcendent, algebraic, computable numbers, etc. In this “story”, we will see examples of numbers and will try to understand them intuitively and visually. Some of these numbers will not even look at all like numbers… But this first episode is about natural numbers. That’s a good start.

The “natural numbers” fulfill two needs : that of ordering, and that of comparing sets “in power”, i.e. by counting.

For the first need, one defines the ordinal numbers, for the second the cardinal numbers. These two notions seem at first hand to be different faces of the same objects… And they are.

Now that we have a “general idea” of what is a number, we can rigorously define ordinal numbers, using two concepts : that of set and of powerset (the set of all subsets). The definition is a little bit formal, but has the advantage of showing that a number can be very different from what we expect…

The next ordinal number, 1, is the powerset of \varnothing, that is to say the set \{\varnothing\} containing only \varnothing.

It quickly becomes tiresome, but it is a rigorous definition of ordinal numbers. They form an ordered set, allowing us to count in an “orderly fashion” since each ordinal contains the preceding ones :

So, regardless of the objects being sets, points or more complex things like apples or marathon runners, all that characterizes the concept of ordinal number is order.

A simple way of seeing the importance of order is to shake a set of Russian dolls… they cannot change their order :

We can’t muddle up ordinals

An ordinal number is just a well ordered set. An order is a mathematical relation that verifies some specific axioms 2, and “well ordered” means that every non empty subset has a least element in that ordering. From any ordinal, the concept of order permits us to define its successor. This concept is then locally constructed, by consecutive steps.

Locally means “in a neighborhood” or “as near as we want”. There is a formal mathematical definition of this concept in topology, but we only need to understand that here we need a reference point in our construction. An ordinal number is defined as the successor of another, and all starts with the zero, but we only need to see the part of the line containing a reference point :

Local definition of the natural number

For example the mailman, when he delivers, only needs to know the number of one house to locate the next house in the street. 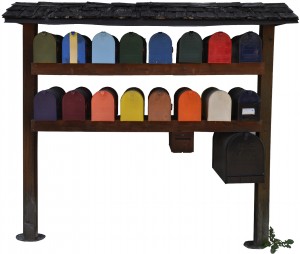 Now, let’s get to cardinal numbers. These can be defined with sets and the concept of equipotence, or bijection. There exists a bijection between two sets if there is a one-to-one correspondence between the elements of each, so when they are equinumerous. For example :

We define cardinals by means of the ordinals :

The cardinal number 0 is the number of elements of \varnothing the ordinal 0.

The cardinal number 1 is the number of elements of \{\varnothing\} the ordinal 1.

The cardinal number 2 is the number of elements of \{\varnothing,\{\varnothing\}\} the ordinal 2.

Contrary to the ordinals, there is no order involved here. Like if we shake a can of marbles and make a mess, the order changes, but the cardinality doesn’t :

We can see that by definition ordinal numbers and cardinal numbers are the same. Nothing really surprising, but it will not be the case for infinite numbers… We’ll see that in a future article.

Ordinal and cardinal numbers are “the same”. The = symbolizes here a bijection

Let’s consider a point on a straight line, representing the ordinal number 0. By defining each next ordinal with a translation on the line, in any fixed direction and of any length that is not zero, one can construct every finite ordinal number. Once the direction is chosen, the length doesn’t matter and can vary, as long as it stays finite and not null, hence keeping the order of the points. Here is such a possible representation (amongst many) of ordinal numbers :

In this particular representation, to add the ordinal numbers x and y is to slide y times the point x towards the right (or conversely). We clearly see then that ordinals are only a matter of order, since we constructed them by progressing along the line to the right (also, we could have taken any curved line instead of a straight line – with a bit of care).

In a similar way, to multiply two ordinal numbers x and y consists in sliding x times the point x to the right, and then redoing it until done y times total (or conversely).

To sum up, the arithmetic of natural numbers consists in “sliding” as many times as necessary. It is a local operation in the sense we described with the analogy of the mailman : only one ordinal number is needed to have the next.

Remark : multiplication by zero does not pose any problem. Its only particularity is that it cannot simplify because any product involving zero has the same result : zero. This is true for ordinals as well as for cardinals.

The cardinal number 1 will be represented by one point on the line :

The cardinal number 2 by two points :

Then, to add cardinal numbers is to “melt” two lines into one :

To multiply two cardinal numbers x and y is to melt the line x with y copies of itself (or conversely).

Here there’s no need to orient the line since the order has no importance whatsoever, and only the total “quantity” of elements on the line is of importance. It is a global operation. We cannot know the number of points on a line if we only see a part of it…

The arithmetic of cardinal numbers is better represented by sets (clearly more natural than points on lines) :

So yeah, ordinals and cardinals are the same numbers alright, but they definitely do not play the same role ! And it will become even clearer with infinity…

Other posts on the topic «About numbers»

This article and the future ones on the theme of numbers are inspired by the excellent website of Kalid Azad Better explained See in particular his article on arithmetics. I am particularly fond of his conclusion :