The group structure is a fundamental concept, used widely and outside mathematics. It is very often used in physics, and we shall see an example of an important group of the theory of special relativity, in a forthcoming article .

Meanwhile, we will simply give the definition and a few simple examples.

What is a group ?

A group is a set with a precise structure. There is two ways to define in a general sense what we call a structure :

A group is an abstract structure on a set G, whose operation \circ satisfies :

– there exists an identity element e so that for each a\in G, a\circ e=e\circ a=a.

– for each a\in G, there exists an element d\in G so that a\circ d=d\circ a=e. It is the inverse element of a for the operation \circ .

There exists groups of a finite number of elements, which are easier to study but nonetheless very interesting.

For example, there is only two groups of four elements. They are entirely characterized by their Cayley table, given by (with e the identity element and a,b,c the three other elements) :

The first table defines a group of order four called “cyclic” because each element can be written as the iteration of a generating element, and the group is noted

The second one is called Klein’s group and designed by

This abstract structure, combining a well defined set of operations on all elements can be interpreted geometrically.The two types of structure we mentioned earlier are strongly linked. We will come back in detail to this general relation between geometrical and abstract structure with a future article about what mathematicians call the Erlangen Program.

Meanwhile, we will only see a short example of this relation.

Let’s consider some geometrical transformations, or symmetries in the plane. Let’s call e the trivial symmetry that doesn’t change a thing, the identity element ; a and b two reflection symmetry of perpendicular axis ; and c a rotation of angle 180^\circ around the intersection point of the two precedent axis.

If we consider the operation \circ as the law of composition of two geometrical transformations, then they form a group, and more precisely a Klein group. Indeed, the reflection symmetries and the two-fold rotational symmetry are involutary, that is to say a\circ a=e, b\circ b=e and c\circ c=e. Note that we of course have a\circ b=c.

In other terms, the set of all symmetries of a (non square) rectangle, which are also its isometries in the plane, form a Klein group of order 4. : 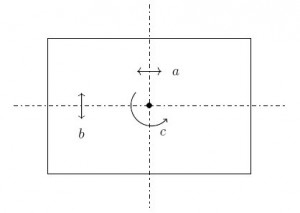 A lot of objects have these symmetries. Note that we not only speak of spatial symmetries, but also of permutation symetries.

A mattress possesses such symmetries. In three dimensional space this time we consider three rotations a,b and c of perpendicular axis. We even use these transformations of the Klein group : to sleep with the most comfort and assure a long life span to your mattress, you need to rotate it regularly to flatten out the dents and fill in the troughs. And it’s not enough to rotate it only one time. One also needs to change its orientation so that the weight doesn’t act at the same place each time.

But the thing is that it only needs to be done one or two times a year, so we never remember how we rotated it last…

Some people recommend to do a rotation c each spring and a reflection a or b each autumn, a system which works pretty well, but some recommend some pretty complicated and often uneffective method… So what to do ?

The answer is remarkably simple : just label the corners ! It only takes to mark each corner of each face of the mattress by the numbers from 1 to 4 and then to count from 1 to 4 at a fixed corner with the appropriate movements ! 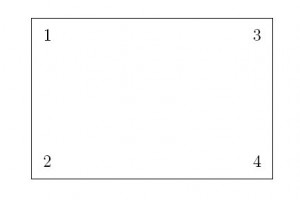 Let’s number all four wheels of a car from 1 to 4 this way : 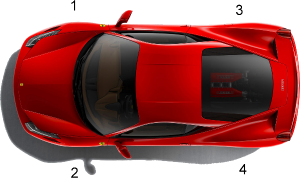 However, the two wheels of an axle must stay on an axle and not be separated, because the car’s geometry, wheels alignment and one’s driving may cause each tire to wear differently, and the traffic laws in France require that the tires of a common axle do not present a big difference in wear, so people are advised to watch over a uniform wearing of tires.

So the group of all the authorized permutations of wheels, which we will call the mechanic’s group is

Of course, a designer of mattress or a mechanic doesn’t need symmetry groups in their every day work ! However, they are useful as soon as we want to understand the profound logical and geometrical relations between objets and the space in which we conceive them. We will see in a next article a more profound and complex use of abstract groups in physics, with the example of the transformations of the theory of relativity.