14 Nov 2010The father of relativity theory : Einstein vs Poincaré

Posted at 23:23h in History of Physics by Johann 1 Comment
Niveau de difficulté 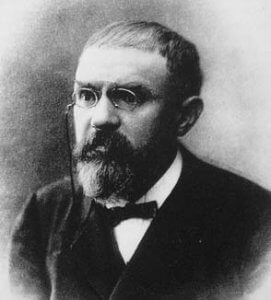 « We are like dwarfs on the shoulders of giants. »

This famous metaphor, attributed to Bernard de Chartres, a XIIth century philosopher, reused by Newton and Pascal among others, is a tribute to savant predecessors and an acknowledgment of the cumulative nature of scientific knowledge.

In this article, we will pay a tribute to Henri Poincaré, a brilliant mathematician, universal thinker and remarkable physicist. However, we will not try to grant him what is not his, but we will acknowledge some of his numerous contributions to the theory of relativity, which main idea is clearly owed to Albert Einstein.

Poincaré, forerunner of the principle of relativity

On September 14th of 1904, Henri Poincaré (1854-1912) gives a talk at the congress of arts and science in Saint-Louis, Missouri 1, which title is The Principles of Mathematical Physics in which he defines :

« The principle of relativity, according to which the laws of physical phenomena must be the same for a stationary observer as for an observer carried along in a uniform motion of translation ; so that we have not and can not have any means of discerning whether or not we are carried along in such a motion. » (Poincaré, 1904, p306)

Poincaré thus extends the relativity of motion to all laws of physics. However, we will see that the epistemological status of the principle is not that of a fundamental principle, but rather that of a common law of physics, verified (or otherwise nullified) by experimentation.

Indeed, the next year Poincaré publishes the paper The dynamics of the electron, in which he remarks about the aether experiments, including that of Michelson which he refers to :

« It seems that this impossibility to disclose experimentally the absolute motion of the earth is a general law of nature ; we are led naturally to admit this law, which we shall call the Postulate of Relativity, and to admit it unrestrictedly. Although this postulate, which up till now agrees with experiment, must be confirmed or disproved by later more precise experiments, it is in any case of interest to see what consequences can flow from it. » (Poincaré, 1905)

We clearly see in this quote that Poincaré considers the principle of relativity to be a law of nature, postulated not by logical necessity, but because the experiments suggest it. In Poincaré’s view, the principle of relativity is the consequence of a dynamics he tries to identify (Damour, 2005), under the hypotheses of an electromagnetic origin of inertia and of all forces.

He will do the same in a similar paper of 1908. Working on dynamics, he needs the concept of aether. Even if Poincaré believes that an absolute physical space does not exist, he sees the aether as a temporary but yet necessary construction of the mind, which goal is to simplify our representations. Hence he will always use the concept of aether in his work.

So his work is immersed in the electromagnetic theories of Maxwell, for whom « the existence of aether is a fundamental and undeniable fact of physics », Darrigol, 2005, p2) and of Lorentz (who works for example on an extension of electromagnetism wich would include gravitation) when he thinks about the possible electromagnetic origin of mass in 1908. Even if he is not looking for a theory of everything electromagnetic, Poincaré completely adheres to Maxwell’s theory and does not question it, hence working in a very different context compared to that of Einstein.

Indeed, Poincaré is born in 1854 and finishes its education in 1878 (after Polytechnique, Ecole des Mines, in parallel to the Sorbonne). The theory of electromagnetism is then still quite new (Maxwell published its paper A Dynamical Theory of the Electromagnetic Field in 1865) and Poincaré is the one who introduces it in France (Rougé, 2008, p29).

So it is for him a thriving theory, already used by engineers even before he starts to teach it in 1887, and confirmed by Hertz’s experiments, which he mentions in his class of 1890 (Rougé, 2008, p29). He knows the theory perfectly, understands it fully and passes it onto the next generations of physicists. His thoughts about electrodynamics and the relativity principle have to fit into this well established body of knowledge. It it does not fit, if experiments disprove it, the principle shall be modified, or even be eliminated.

According to Poincaré, physics is in a period of crisis. He observes it, reports it, and makes suggestions, sometimes prophetic ones. M.A.Tonnelat quotes him :

« We shall, therefore, only have to hand over the matter to the experimenters, and, while waiting for them to finally decide the debate, not to preoccupy ourselves with these disquieting problems, and to tranquilly continue our work as if the principles were still uncontested. » (Poincaré, 1904, p616 of The Principles of Mathematical Physics)

And she concludes : « We see how much Poincaré’s thinking disagrees with that of Einstein. The «crisis of relativity» is, in Poincaré’s view, a purely experimental and probably only passing issue. » (Tonnelat, 1971, p123-124)

Woldemart Voigt detects in 1887 (Ueber das Doppler’sche Princip, Göttinger Nachrichten, num. 7, p41-51, 1887) the invariance of some differential equations under the changes of coordinates (in modern notation) :

For Voigt as well as for Lorentz, these transformations still are only mathematical tools without any particular signification.

In an article of 1899 (Simplified Theory of Electrical and Optical Phenomena in Moving Systems, Proceedings of the Royal Nétherlands Academy of Arts and Sciences, vol. 1, p427-442, 1899), Lorentz will observe that the contraction hypothesis naturally flows from the transformations, which he’ll modify :

In a paper of 1904 (Electromagnetic phenomena in a system moving with any velocity smaller than that of light, Proceedings of the Royal Nétherlands Academy of Arts and Sciences, vol. 6, p809, 1904) Lorentz will give again different ones :

So we can clearly see that in 1904, the shape of these transformations is not fixed still, and will appear slowly, by trial and error.

The next year, 1905, Poincaré gives a talk at the Académie des Sciences, Sur la dynamique de l’électron which summarize the paper (Poincaré, 1905) he intends to present in Palermo, in which he confirms and corrects Lorentz’s work of 1904, gives the corrected transformations their name

and observes they must form a group :

So he gives them their definite shape 2 :

So he learns electromagnetism by himself and is somewhat self-taught in modern physics of the time. His thinking does not depend on these ideas and he builds his own point of view.

We’ve seen in the last post on the Lorentz group Einstein’s formulation of the principle of relativity, in his paper On the electrodynamics of moving bodies, and we can see that it is exactly equivalent to Poincaré’s (let’s remark that Einstein only knew of his book Science and hypothesis, 1902, at the time, and had no knowledge of the papers we mentioned above, see Pais, 1993).

But then, they still differ notably on three counts :

\star\quad First of all, his motivation is different. Einstein does not want to only correct Lorentz’s theory, he rejects an asymmetry of Maxwell’s theory in the induction effect, where a phenomenon receives two different explanations depending on the observer. It is this necessity of symmetry that justifies, in his view, the range of application of the principle of relativity to all of physics.

\star\quad Also, the epistemological status of Einstein’s principle is fundamentally different than that of Poincaré : Einstein sets a condition for the expression of all laws of physics.If an equation or a postulate are not invariant under a Lorentz transformation, then the principle of relativity assures us that they are not laws of nature. Einstein sees the principle of relativity as a universal property, established as an axiom, it is a guide and the basis of the theory, a principle theory. It is a law about the physical laws, a super-law (méta-loi).Moreover, the principle of relativity concerns space-time and gives to it a physical meaning even if this space is empty, bearing no body (it is a kinematics, that is to say a condition for the expression of dynamics), wich Poincaré thinking about dynamics only could neither conceive, nor accept (Paty, 1987, p15).This consideration alone allows us to clearly differentiate the principle’s roles in the work of Poincaré and Einstein.To that, we have to add an important difference in style : Einstein constructs theories, with an axiomatic method, but Poincaré is merely a critic and suggests solutions, without ever building any complete theory, only presenting ideas historically (Rougé, 2008, p194).

\star\quad And last, since the principle tells us that there can be no privileged reference frame to describe the laws of physics, a mechanical aether is an aberration, in total logical contradiction with the theory. To try to keep it would force us to take away its only physical property standing : its immobility (Einstein, 1921, p84).
It is a concept that does not simplify anything according to Einstein, and is merely a source of contradiction, only causing problems without solving any.

We saw that it is Poincaré who names and formulates the principle of relativity, names and corrects Lorentz transformations, reports and exploits its group structure. To these examples, we could add that he establishes the method for synchronizing clocks by light signals (La mesure du temps, Revue de métaphysique et de morale, T.6, janv 1898), the formula of additivity of velocities, the invariance of Maxwell’s equations in a vacuum, and the hypothesis of the speed of light limit (Poincaré, 1905). Let’s not forget that he also already uses a quadridmensional formalism that will inspire the future works of Minkowski, and then some. What is left ?

He clearly masters most of the concepts and technical tools of what we call now the special relativity theory, except (and it is fundamental !) that it is to him just corrections brought to Lorentz works, part of a dynamics, and what’s more, depending upon Maxwell’s electromagnetic theory.

That’s what makes Einstein the real father of the theory, because he presents in his 1905 paper all of these points (except the importance of the group structure of Lorentz transformations) in a coherent theory, building a kinematics on which the laws of physics will depend (and not the other way around), including those of electromagnetism.

Still, Poincaré surely was a great and major precursor amongst all physicists and mathematicians who played a role in the history of the theory of special relativity.

2. The opposite signs mean only to consider the inverse transformations, without loss of generality.

\star\quad Olivier Darrigol, The genesis of the theory of relativity, séminaire Poincaré, 2005.